Excerpt from The Charge by Sharon Bayliss

Sharon Bayliss is a pillar in the indie author community. Her work with The Haunted Writing Clinic & Contest and organizing multiple blog tours for indie authors of all walks is inspiring to say the least. And now her new book, The Charge, is available for purchase and I could not be more excited. The cover looks amazing, the blurb fantastic, and the excerpt I am about to share is bound to hook you! I'm still trying to scroll down and find the rest of it. To save you that trouble, you can find The Charge available for purchase at Amazon and Barnes & Noble. 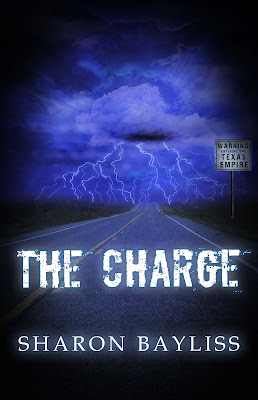 When King of the Texas Empire kidnaps Warren's brother, Warren embarks into a still Wild West to save him. On his journey, he makes a discovery that changes his life forever—he and his brother are long-lost members of the Texas royal family and the King wants them both dead.

He gets help from an activist Texan named Lena, who's itching to take on the King and happens to be a beautiful firecracker Warren can't stay away from. Convincing her he's not one of the bad guys becomes harder when a mysterious energy stirs in his body, turning his brain into a hive of emotions and memories—not all his own.

A legacy of violence is not all he inherited from the brutal Kings of Texas. The myth that the royal family possesses supernatural powers may not be myth at all.

Gone are the days when choosing a major was a big deal. Now Warren must save his brother and choose whether or not to be King, follow a King, or die before he can retire his fake ID.

Will Cole sat on the couch and put his head between his knees. He listened carefully for the sounds of the elevator so he would have time to compose himself before the door opened. He figured all guys feared introducing their girlfriend to their mother. But not all guys had the President of the United States for a mother, and a girlfriend on the terrorism watch list.
He heard the sounds of the elevator moving closer and before the ding sounded, Will stood and posed with a smile. His girlfriend, Lena Lowell, along with several armed members of the Secret Service, exited the elevator. Apparently not fazed by the small army around her, Lena approached Will and kissed him like they had met at a café for brunch.
"You look really pretty," Will said.
"Is this outfit okay?" She brushed invisible dust off the shoulder of a royal blue dress that hugged her curves pleasantly. The blue made the ample helping of red in her blonde hair look brighter.
"It's perfect. I hope it wasn't too expensive. I didn't know you were going to buy something new. You should have told me, I would have bought it for you."
"Well, I wasn't going to wear a Texas Freedom T-shirt."
Will eyed the guards cautiously, but they didn't react. Secret Service knew all about her affiliation with the radical Texas Freedom Campaign, but he wished she would let the elephant in the room sit quietly.
"Besides, you know how I feel about you buying me things." She leaned close to him. "You're nervous. You have those little red patches at the base of your neck that you get when you're nervous."
Will rubbed his neck. He hated having a tell. The guards must have gotten some instruction in their earpieces that Will couldn't hear, because they re-entered the elevator with a sudden lack of concern for the possible terrorist in the President's private quarters.
Will wouldn't miss the White House. Living in the most securely protected home in the United States made it hard to have any fun. The same army of guards that kept invaders out had also kept Will in a painful state of good behavior. And if he did manage to sneak past them, an even more frightening army of paparazzi waited outside. He had just turned eighteen, and would move out in the fall to begin college. It couldn't come soon enough.
He might live in the White House again one day, but when he did, the Secret Service guards would work for him.
"I'm not worried," Will said. "You and my mother actually have a lot in common. I'm sure you'll get along great."
"That would be a little creepy if I thought it were true," Lena said.
Will's phone vibrated against his leg and he jumped.
The word Mom flashed on his phone.
"She's not coming," Will said. He let out an audible sigh of relief.
"How do you know? You didn't even answer it yet," Lena asked.
The low, gruff voice on the other line surprised Will. "Mr. Cole?"
"Uh, yes?"
"Everett Ward, Secret Service. Your mother regrets that she cannot attend lunch with your lady friend. She is preparing to make a statement."
"About what? Did something happen?"
"She asked me to tell you not to worry. Everything will be okay."
"What's going on?"
"Just turn on the television."
"Which channel?"
"All of them. Good afternoon to you, sir."
Posted by Unknown at Saturday, April 13, 2013