Kiya: Inside the Egyptian City of Amarna 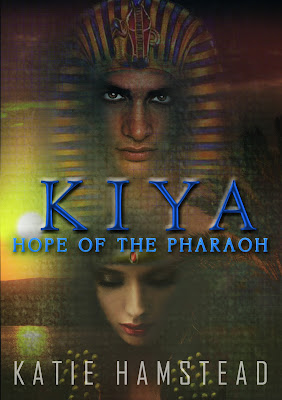 World-building is such a huge part of what we, as writers, do. Sometimes the city in which our story takes place can take on a life of their own. Just look at Tolkien's Middle Earth or the world of Hogwarts from the mind of J.K. Rowling.

Sometimes, though, they can be plucked right from history. I'm not sure which is harder--starting from scratch or doing the research for a real place. Katie Hamstead is here to show us the end result of her hard work for her novel Kiya: Hope of the Pharaoh (available on Amazon and Barnes & Noble) by giving us a brief tour of the Egyptian City of Armana as seen by her main character.

The city of Amarna, built by Pharaoh Akhenaten’s decree and under his direction, was a short lived capital of Egypt. But, it is the city in which Kiya: Hope of the Pharaoh is set. So, I’m going to give you a guided tour through Kiya’s eyes.
The city was centered around the main city, with suburbs built to the south.
“…and I beheld for the first time the city of Amarna. Long, white walls ran along the eastern shoreline, with a wide gate framed by pillars that faced the stone wharves. To the south of the main city, I saw smaller enclosed areas made from darker stone—the residential districts.”
Kiya, having grown up in Thebes, which was considerably older, not to mentioned designed for more than just one god. As she moves through the city she observes:
“I saw open streets and courtyards. The white walls of the buildings reflected the glare from the sun; the architecture looked modern and stylized, with hieroglyphs depicting the great Aten over each doorway. The men led me toward the palace down a wide, busy road, where people stopped and moved aside to watch us.
We passed under a covered bridge that led from a large, elaborate house into the palace, which had windows cut out along the middle.”
The city itself was used by later Pharaohs as construction material and torn down, so what is left now is mostly foundations which were buried by the desert. As a result, I couldn’t find much information on precise details. All I knew was the palace was located to the north, with the royal residences also in that vicinity. So, also knowing that the Pharaoh had many wives and concubines, I thought that they’d all be placed together in a protective, enclosed structure.
“The women's wing was poorly named. It was not so much a wing as a dormitory. A large common area lay before me, with a pool in the middle. From this common area, several corridors branched off. Like everywhere else in the palace, the common area and corridors remained uncovered, but I could see that the corridors' rooms had roofs.”
To find out more about this city, check out these websites:
http://amarnaproject.com/
http://www.britannica.com/EBchecked/topic/700792/Tell-el-Amarna
http://www.world-archaeology.com/great-discoveries/tell-el-amarna/
As well as, of course, your local library!
Posted by Unknown at Saturday, May 11, 2013