Knowing When to Throw in the Writerly Towel

No, I'm not talking about giving up on a story you are writing. I don't give up easily on story ideas. But I am talking about goals today, and knowing when they might be too much. 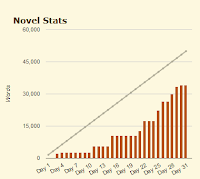 I set a goal for myself to finish Altar of Reality by the end of the month and to win CampNaNoWriMo in the process. Today is the last day of the month, and though my bar looks really close, it is too far away for me to manage.

I've been plugging away for the past week with an average of 5k a day. And if I had continued my 5k a day average, I would have finished on time. But a lot of things got in the way, as they usually do with life. The same thing happened to me during the last CampNaNo as well.

So how do we know when to throw in the towel? Easy. When you are sacrificing your own health in order to meet your goals. Which is exactly what I was doing. 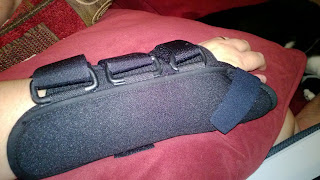 As some of you may know, I recently landed myself in the mother of all braces--the thumb spica splint. I have carpal tunnel and tendonitis in my left wrist, which is pretty painful. It wouldn't be so painful if not for the fact that it keeps popping, so I essentially keep injuring myself. Part of that has to do with work as well. Needless to say, it has slowed me down quite a bit. I risked writing without the splint on after I spent about an hour convincing myself the splint was causing me more pain than good, but was quickly proved wrong on that.

And pretty soon, I had to admit to myself that pushing myself to write 5k a day was not helping matters at all. I had to leave work early last night because it was hurting so bad. On the way home, I started thinking about how I would have extra time to write from leaving early. But by the time I got home and sat in front of my laptop, I realized it wasn't worth it.

Sure, I love winning NaNo. I've only done it twice in the times I've attempted it, and I really wanted to claim a third victory with my new WIP. But I have to start taking care of myself. My hands are such an asset for both career paths I plan on attempting (writing and physical therapy), which means they are invaluable and I need them to work right.

I'm supposed to get my brace off next week, but my hopes aren't high for that happening since I'm still in pain and things keep popping. But I do know that I will be making sure I actually rest my arm this time. No more 5k days. And I might take some time off work, at least for a week or so. Working at a grocery store requires both hands more than you would think, and my tendency to be stubbornly independent and not ask for help carrying things or stop bagging isn't helping the healing process.

So, in conclusion, I might not be the one-armed wonder after all. But if that means I get to keep writing with both hands for years and years, I am good with that. My well-being has to come before my words.