Are you ready? The shadow is falling, and the meteor is coming... SHADOW FALL by Audrey Grey has arrived! The stakes are high--it's #trialordie. You've seen the teasers, but now we have a full excerpt prepared for you. Read on below, and be sure to get your copy today for the special release week price of 99 cents! 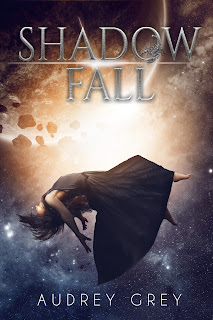 The asteroid hurtling toward the earth will kill billions.

The Emperor and his Gold Court will be safe in their space station, watching from the stars. The Silvers will be protected underground. But the Bronzes must fight it out at the Shadow Trials for the few remaining spots left on the space station.

When an enigmatic benefactor hands Maia Graystone a spot in the Trials, she won’t just get a chance at salvation for her and her baby brother, Max: She gets to confront the mother who abandoned her in prison, the mad Emperor who murdered her father, and the Gold prince who once loved her. But it’s the dark bastard prince she’s partnered with that will make her question everything, including her own heart. With the asteroid racing closer every day, Maia must trust someone to survive. The question is who?


My legs wobble as I step into the now lukewarm water. I sink to the bottom. Tiny bubbles escape my nose as I watch all the ugly remnants from the last seven years leave my body.
Lungs burning, I rise and come face-to-face with Pit Boy.
I glare at him. “You really have to work on the knocking thing.”
Despite the fact that I’m indecent, his attention never falls from my face. I almost wish it would, just to give me a break from the intensity of his focus.
“I only get a few more hours to be the ‘one-eyed freak’ from the pit. Might as well take advantage.” He doesn’t dare crack a smile, so it’s hard to tell if he’s joking or serious.
“Don’t worry. In my heart, that’s exactly who you’ll always be.”
His words remind me that soon we’ll be reconstructed using forbidden nanotech. But it won’t just be our flesh they’ll reengineer. It will be our brains, too.
I don’t foresee my rewiring being too complicated, but Riser needs to upload almost twenty years of false memories. That will be tricky and time-consuming.
And time is the one thing we don’t have.
Riser flicks his gaze to the mirror. He lifts a hand, touches the patch of mottled flesh where his eye should be.
“How did it happen?” I ask.
“Careful, my lady.” His gaze settles on my face. “You’re beginning to sound like you care.”
I roll my eyes. “And I thought I was lacking in conversational skills.”
He focuses his attention on the graffiti sprayed across the mirror.
“It’s written language,” I blurt, even though all I want to do is end the conversation so Pit Boy can leave. His presence unnerves me more than the other Pit Leeches ever could. “It’s how we communicate.”
“I know what it is.” He examines his jagged thumbnail. “I just . . . can’t read it.”
“It’s just stuff about the Chosen. You know, insults.” The populace is finicky. As much as they love watching the Chosen with their petty intrigues and court life, they would be just as happy to see their heads on a pike.
“Chosen?”
Time to explain what you are, Everly, Nicolai’s voice grates inside my head. Riser’s eyes flutter just enough that I know he’s heard Nicolai’s voice too.
You do it, I think, watching Riser’s reaction. But his face remains emotionless; either he’s a good actor or only Nicolai can hear my response.
“The Royalist astronomers discovered the asteroid twenty-one years ago,” I begin. “It’s actually a slow moving planet called an earth-crosser, meaning its orbit and ours intersect every twenty-thousand years. Usually it’s too far away to affect us, but this time it will pass close enough to wreak havoc and make the earth uninhabitable for years.” I stir the water with my big toe. “Before I was born, the Emperor decided that creating a population of genetically superior humans would be a great idea, you know, just in case the Caskets don’t work or the asteroid does more damage than predicted.”
Riser’s hyper-focused gaze bores through me. “You’re one of them?”
“Yes.” I run my hand through the filthy water. “But my father’s a Bronze, so even though my mother comes from a Gold House, the Emperor only allowed them one Chosen instead of the customary twins. So it’s just me . . . not Max.”
“What makes being Chosen so special?”
“I don’t know . . .” I bite my lip, trying to remember everything my parents told me. “My genes are perfect, I guess.”
For some reason, talking about my body makes me remember that I am naked in a room with a boy. As if reading my mind, Riser slowly lets his gaze fall, his expression both curious and unapologetic as he takes me all in, his thoughts cryptic.
“What are you staring at?” I blurt, smashing my breasts beneath my hands. Not like there’s much there to cover. “Haven’t you seen a naked girl before?”
A smile twitches his lips. “Not one that’s genetically flawless.”
“It doesn’t work that way! You can’t just look at us and tell. We look like everyone else—”
“No.” Riser shakes his head, a dark swath of hair covering his damaged eye. “You don’t. Whatever you are.”
“You must be happy . . . about our reconstruction, I mean,” I mumble, trying desperately to change the subject. “They’ll fix your eye . . . and . . . and all those horrible scars.”
I freeze as he slides off the counter, unable to look away as he hooks one finger beneath his shirt and lifts.
Scars ravage his anemic body in varying shades of red and silver and white. Some deep and pitted like the craters of a far-away planet, others smooth and neat. One particular nasty scar carves down his shoulder, tunneling across his chest and stomach. A fresh red wound nestles just below his throat.
He carefully touches the long ugly one. “I’m not ashamed for surviving.” 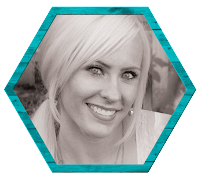 Audrey Grey lives in the charming state of Oklahoma, with her husband, two little people, and four mischievous dogs. You can usually find her hiding out in her office from said little people and dogs, surrounded by books and sipping kombucha while dreaming up wondrous worlds for her characters to live in.