Happy Cover Reveal to Shadow Rise! Audrey Grey is throwing us back into the proverbial pit with Maia as she continues her fight to save everyone from the asteroid hurtling towards Earth and the emperor keen to let all those not deemed worthy die. The second book in the Shadow Fall series releases 11/14/17. Come celebrate the cover reveal at the Facebook Party and be sure to preorder your copy today! 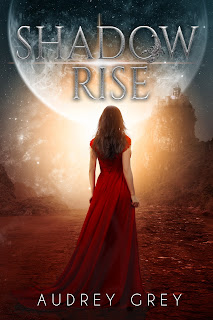 One rash decision during the Shadow Trials left innocents dead, friends injured and hunted by the Empire, and Maia Graystone imprisoned in the Tower, forced to watch as the asteroid in the sky grows larger by the hour.
‪
‪Unsure if Riser Thornbrook is alive, Maia must find a way to battle the Empire from within its own walls and escape so she can fulfill the promise to her father and stop the asteroid. But when she breaks free and joins the Rebel army Nicolai has gathered, she discovers she’s been branded a traitor. With war between the Rebels and the Empire looming, old alliances shifting, and suspicion hanging over her head, she must fight in the Rebel Blood Courts—and win command—to regain their trust.Only problem is she must first defeat the reigning champion, someone she knows all too well.

Audrey Grey lives in the charming state of Oklahoma, with her husband, two little people, and four mischievous dogs. You can usually find her hiding out in her office from said little people and dogs, surrounded by books and sipping kombucha while dreaming up wondrous worlds for her characters to live in.