Ann Gimpel, author of Earth's Requiem, book one of the Earth Reclaimed series, is stopping by today and has been kind enough to let me interview her. We'll be talking ecological influences, processes, publishing, and everything in between, and then I'll fill you in on the details of her new book. Let's get to know Ann a bit first, shall we? 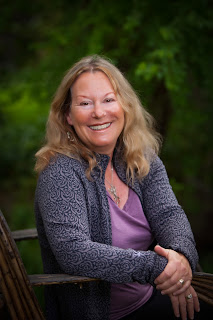 Ann Gimpel is a clinical psychologist, with a Jungian bent. Avocations include mountaineering, skiing, wilderness photography and, of course, writing. A lifelong aficionado of the unusual, she began writing speculative fiction a few years ago. Since then her short fiction has appeared in a number of webzines and anthologies. Several paranormal romance novellas are available in e-format. Three novels, Psyche’s Prophecy, Psyche’s Search, and Psyche's Promise are small press publications available in e-format and paperback. Look for three more urban fantasy novels coming this summer and fall: To Love a Highland Dragon, Earth’s Requiem and Earth’s Blood.

A husband, grown children, grandchildren and three wolf hybrids round out her family.

MV: You say that your books have an ecological twist. What does that mean, and what else can you tell us about the ecological twists you write?
Ann Gimpel: I’m concerned about the damage we’ve done to Earth, and about climate change, and things like genetically modified foods and their impact on our bodies. It isn’t surprising many of my books have a dystopian, post-apocalyptic feel to them.
I’ve spent a great deal of my life in the backcountry, both in the U.S. and in other countries. Pollution is truly shocking in some third world countries. For example, the river flowing through La Paz, Bolivia, runs red and nothing grows within about a hundred yard radius of its banks, probably because it’s full of raw sewage. I read an article a few days back about the oceans, titled, The Oceans are Broken. It was chilling, and made me sad reading about overfishing, no more seabirds, and the Pacific being turned into a giant garbage dump that’s so bad the sailor was afraid to turn on his motor, for fear the propeller would tangle in debris.
I guess I’d like to believe if each of us did a little bit, like watching our carbon footprint and making a conscious effort to reduce it, we’d make progress toward saving our home.

MV: What can you tell us about that first 500 page novel you wrote? What are some of the lessons you learned from writing that first book?
AG: Oh my. I learned about writing clean POV, and about building solid characters, and about plot lines and pacing and tension. Just about everything, really. Fortunately, a wonderful copy editor took me under her wing. Jessica will always have a warm spot in my heart.
There are many, many elements that go into writing a novel. It’s impossible to master all of them at the same time. I focused on character development first, probably because it was easier for me than weaving plot lines together. Over time, I’ve worked hard to hone my craft, but I’m still learning. It feels good to pick up something I wrote a year ago and be able to see mistakes in it. That tells me my craft has grown.

MV: As writers learn more about their craft, their process tends to change. How has yours changed since you first picked up a pen?
AG: Funny you should ask. I used to have to go through my manuscripts at least four times before they were ready to submit. I’ve pared that to twice. And I’m much better at reading on the screen. I used to print everything, which was an enormous waste of paper and ink. I’ve learned to keep storyboards to keep my characters straight. I do that on paper, not with one of the computer programs like Scrivener. I’ve also gotten better at seeing how plots weave together, so I think my storylines have become more natural.

MV: You write paranormal romance and contemporary fantasy. What draws you to these types of stories?
AG: I write the same kinds of stories I like to read. I also read some science fiction and high fantasy. I’ve sold a number of short stories in those genres, but the sad truth is there aren’t that many readers in those two genres. One of the reasons I started writing romance, other than that I enjoy reading about hunky alphas and gutsy heroines, is there are lots of romance readers. It’s easy to understand why. HEAs are a huge draw. Reading is an escape and everyone wants to read about something that gives them hope.

MV: Are you more of a pantser or plotter?
AG: I’ve tried to plot. It doesn’t work for me because me characters thumb their noses and tell me they have better ideas than mine. They’re generally correct, so I’ve learned to just sort go with the flow.

MV: The wilderness seems to be your soundtrack. Do you also use music as inspiration to write, or do you prefer the quiet?
AG: I’ve always been one of those people who can’t listen to music and write. I was like that in school doing homework, and I’m still that way. Now I can listen to music and do math. Go figure.

MV: Your website lists several other books and series. What can you tell us about these other works?
AG: They fall into two general camps: urban fantasy and paranormal romance. The urban fantasy novels are full length, so 80-100K+. The paranormal romance books range from 15K to 71K, with an average around 50K. I do have several series, but my personal bent is to stop a series at three books. Beyond that, the characters don’t feel as fresh to me, and the world sort of runs out of oomph. At least that’s been my experience reading other writers and there’s absolutely no reason to believe I could do a better job than them.

MV: What can you tell us about the path you took to getting published?
AG: After that first novel that went nowhere (and its sequel!), my copy editor friend suggested I try my hand at short stories. That was in Sept of 2009. By late December, my first short story, a hard science fiction tale about life in the arctic, was accepted by the Aurora Wolf Literary Journal. I started getting stories accepted fairly regularly after that. Encouraged, I began a new novel as part of a Book-in-a-Week challenge my online critique group hosted. I didn’t finish an entire novel, but I did get 50K words written. I built on them, honed my effort, and the book was accepted as part of a three book deal from a small press. Acceptances started rolling in after that. I’ve pretty much stopped writing short stories for now, but I may pick them up again because they offer opportunity for me to write in different genres.

MV: What advice would you give to other writers who wish to get published?
AG: Write every day. Find a good critique group where they’ll be honest, and develop a thick skin. No one can see the mistakes in their own writing all the time and neophyte writers can hardly see any of them. For two books of mine that released this summer and fall (Fortune’s Scion and Earth’s Requiem), I’d written them quite a while back. Frankly, I was horrified by all the mistakes in the manuscripts and shocked either had been accepted for publication. Of course, all (or most) of the mistakes were fixed prior to publication. Both were always good stories, but my rendition was rough. I like to think it’s improved.

MV: What’s ahead for you as a writer?
AG: Good question. 2013 was nuts. I’m slowing my output considerably to allow myself to have some kind of life away from the keyboard. The plan I instituted last summer was I’d write a book a month, ten months out of the year and take two months off. So far, it’s working. Of course the “off” months aren’t truly “off,” since I have marketing and editing to do, but at least I’m trying to manage my time better. Hubby gets grumpy when I don’t make time for him, and I don’t blame him! 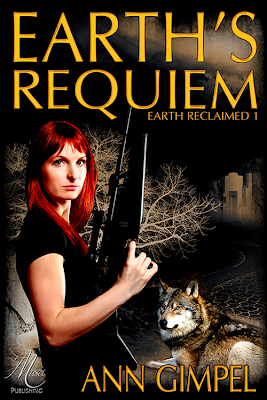 Resilient, kickass, and determined, Aislinn's walled herself off from anything that might make her feel again. Until a wolf picks her for a bond mate and a Celtic god rises out of legend to claim her for his own.

Aislinn Lenear lost her anthropologist father high in the Bolivian Andes. Her mother, crazy with grief that muted her magic, was marched into a radioactive vortex by alien creatures and killed. Three years later, stripped of every illusion that ever comforted her, twenty-two year old Aislinn is one resilient, kickass woman with a take no prisoners attitude. In a world turned upside down, where virtually nothing familiar is left, she’s conscripted to fight the dark gods responsible for her father’s death. Battling the dark on her own terms, Aislinn walls herself off from anything that might make her feel again.

Fionn MacCumhaill, Celtic god of wisdom, protection, and divination has been laying low since the dark gods stormed Earth. He and his fellow Celts decided to wait them out. After all, three years is nothing compared to their long lives. On a clear winter day, Aislinn walks into his life and suddenly all bets are off. Awed by her courage, he stakes his claim to her and to an Earth he's willing to fight for.

Aislinn’s not so easily convinced. Fionn’s one gorgeous man, but she has a world to save. Emotional entanglements will only get in her way. Letting a wolf into her life was hard. Letting love in may well prove impossible.