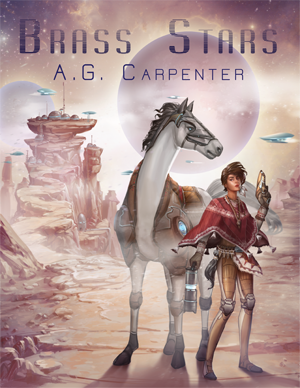 Tashndelu Sand has wandered the known universe on a mission of vengeance.  She’s spent years tracking down the gang who murdered her mother.  And, with the help of Snyder—a psychotic cyber-horse with an agenda of his own—she’s killed all but one: Brannigan.

Now she’s come to Paradise, a lonely town on a desert planet.  Here, Brannigan rules with a new gang.  Here, the graveyard is filled with the corpses of gunslingers who have tried, and failed, to kill him.

Get in, kill Brannigan, and get out.  That’s the plan.  And Tashn is determined to finish what she started.  She’ll not be stopped: not by Brannigan’s army; not by her feelings for Johnny, an Extra sapien like her; not even by the darkness she sees in herself.

About the Author:
A.G. Carpenter writes fiction of (and for) all sorts. She studied film-making in college, but quickly discovered that pen and paper are a less costly medium. She likes: movies where things explode, rainy days, strong tea with lots of milk and sugar. Her favorite color is black.
She lives in the South-eastern United States with her husband, their lively son and a herd of cats.
Twitter: @Aggy_C


Excerpt:
I stand up, sway for a moment and catch my shoulder hard against the post. “Ungh. Damn.”
Jackson is on his feet in a heartbeat, slipping his arms around my waist. “Easy.”
My cheeks are hot. At least it’s dark and maybe he won’t notice. “I’m all right.”
“You’re certain?”
“Just tired.” I try to shrug away from his hands. “It’s been a long day.”
“Yes.” A pause. “Tashn…” He leans in and kisses me.
Warm as a spring afternoon. Intense as a lightning strike. His arms holding me hard and close. Pushing me back toward the house.
It’s nice. Enjoyable, even. And also terrifying. There is no spark like there is with Johnny, no rush of blood in thighs and breasts.
This is energy of a different kind. I take a breath, trying to find something to say. “What the hell, Jackson.” I thump his shoulder with my fist. “You think I’m easy?”
“No.” His eyes are dark, serious. He pulls me in a second time, slower, but no less intense. My chest aches with it.
“Stop.” My hands are knotted in the front of his shirt, caught somewhere between pulling him close and shoving him away. “Let go of me.”
He takes a half-step back, leaning against the other side of the doorframe. Only inches separate us, but it hurts like a bruise.
I press both hands against my chest, panting for breath. This isn’t lust, and I’ll be damned if I think it’s love. But I know this pain. The grief of separation, no matter how slight. The echo of connection, no matter how permanent the distance.
I felt this way when they put Mother under the sand.
I felt this way the day I left my father’s village.
“Damn you, Jackson.” I can barely whisper around the weight over my heart.
He cups my face between his hands. “Come inside, Tashn.”
“I can’t.”
“John won’t keep you safe like I will.”
“Like you will. A gunner with no gun.” I grin, bitter. “I think I’ll take my chances with the one-eyed Extra.”
He tips his head as though he will kiss me again, but this time I lean away from him.