It's Takeover Thursday, and today Betty Bright from Michael Panush's Dead Man's Drive is stopping by to answer some hard questions and tell us about working at Donovan Motors--and going up against the biggest baddy in La Cruz! 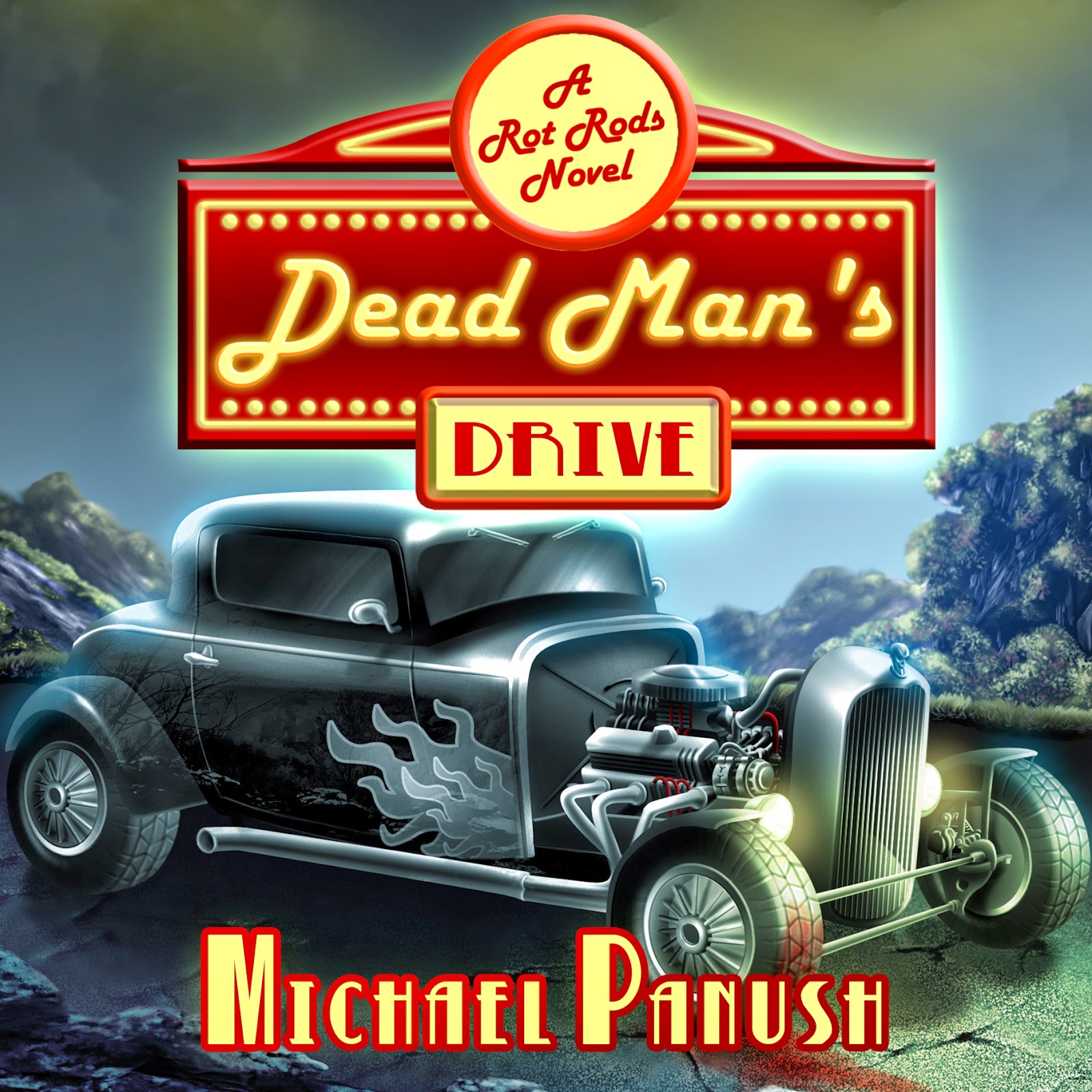 La Cruz looks like an average Southern California small town in the 1950s Post-War Boom, but it has some dark secrets - and its guardians. They are the supernaturally adept drivers of Donovan Motors, including former Okie bank robber Wooster Stokes, Zoot Suiter and part time shaman Angel Rey, college girl and burgeoning sorceress Betty Bright and --their latest member -- an amnesiac zombie known only as Roscoe. The drivers stand between La Cruz and chaos with only their wits and some fast hot rods to help them hold back the darkness. But an onslaught of demonic attacks heralds a new danger. Reed Strickland, a ruthless tycoon with unholy assistance, seems intent on making La Cruz his. Only Roscoe and the drivers can stop him. But Strickland's allies stir painful memories in Roscoe and even an undead gearhead is no match for his own past. Roscoe will need to overcome his memories, stand with his friends and keep his motor as the battle for La Cruz begins in a tale of white hot vehicular action, arcane Noir, and Hollywood horror that reveals the rotten heart of California's Golden Age.

Buy it on Amazon or add it to Goodreads

Twenty-Four years old, Michael Panush has distinguished himself as one of Sacramento's most promising young writers. Michael has published numerous short stories in a variety of e-zines including: AuroraWolf, Demon Minds, Fantastic Horror, Dark Fire Fiction, Aphelion, Horrorbound, Fantasy Gazetteer, Demonic Tome, Tiny Globule, and Defenestration. He published his first novel, Clark Reeper Tales, for his high school senior project. A graduate of UC Santa Cruz, Michael currently serves as a City Year Corps Member at Rosa Parks Middle School. His books with Curiosity Quills include The Stein and Candle Detective Agency, Volume 1: American Nightmares, Volume 2: Cold Wars, and Volume 3: Red Reunion, all featuring a pair of occult detectives in the 1950s, Dinosaur Jazz-- where The Great Gatsby meets Jurassic Park -- a story about a Lost World battling against the forces of modernization; and El Mosaico, Volume 1: Scarred Souls and Volume 2: The Road to Hellfire, a Western about a bounty hunter whose body was assembled from the remains of dead Civil War soldiers and brought to life by mad science. Dinosaur Dust and El Mosaico, Volume 3: Hellfire are expected to be released soon.

Michael began telling stories when he was only nine years old. He won first place in the Sacramento Storyteller's Guild "Liar's Contest" in 2002 and was a finalist in the National Youth Storytelling Olympics in 2003.

In 2007, Michael was selected as a California Art's Scholar and attended the Innerspark Summer Writing Program at the CalArts Institute. He graduated from John F. Kennedy High School in 2008 and currently attends UC Santa Cruz.

Hello, Betty! Nice to meet you. Why don't you tell us a bit about yourself to get us started?

Um, let's see – my name's Elizabeth Bright, but my friends call me Betty. I live in La Cruz, California, a small town a little south of Los Angeles. My father's Professor Horace Bright. He teaches folklore classes at UCLA, which is also where I go. I'm majoring in folklore as well, actually. It's very helpful for my current job with Donovan Motors. What's also helpful is my passion for cars. I've been tinkering with engines my whole life. During the war, when I was a little girl, you had women working in factories, playing with machines, and having real power. I never fit in too well in suburban La Cruz, so that seemed like a fine escape. Now, knowledge of folklore and skill with cars comes in handy for working at Donovan Motors. Our job is protecting La Cruz from ghosts, monsters, demons, and everything else that goes bump in the night.

Motors help with that – and so does magic.

How did you get involved with Donovan Motors?

Well, I've always known about Donovan Motors. Everyone in La Cruz does. The people working for the Captain – he's the guy who owns Donovan Motors – are always spoken about in hushed whispers. La Cruz is a pretty square sort of town, so the drivers operating out of Donovan Motors sort of stick out. That's fine with me, of course, as I've never exactly fit in. But how exactly did I get started? Well, it involved a vampire attack in my senior year in high school. A bunch of European vampires tried setting up a base of operations in an old mansion in Redborough. That's the countryside around La Cruz. I nearly got my blood drained, but my skill with automobiles and my knowledge of vampire lore helped me survive. The Captain found out about it and offered me a job.

What can you tell us about your coworkers?

There's the Captain – he's the boss, though. He's a very quiet sort of man. Reserved, I guess. He was a veteran of World War One and supervised America's occult defense programs during World War Two. But he's a good man, even if he's a little button-down. There's Wooster Stokes. He's an Okie who became a big time bank robber during the Great Depression. Wooster's a nice fellow, but he's a bigot and can be a real jerk at times. He is a master at using a Tommy gun, though. Angel Rey is much nicer. He was a kid during the Zoot Suit Riots, in Los Angeles during the War. They didn't get reported in the papers much, but the US Navy and the LAPD pretty much declared war on anyone with brown skin. It got pretty brutal and poor Angel has that in his past. He's a great driver and his mother was the neighborhood shaman. There's also Roscoe – the newest member of the drivers. Roscoe's a zombie – a living dead guy with no memory. Angel actually ran into Roscoe while he was shambling down a road. Roscoe may look a little weird, but he's a really great guy. He's an ace with a car and with a gun – especially the sawed-off shotgun he uses. He struggles with not knowing his past. I think he's afraid of it.

Donovan Motors does operate as a legitimate garage. We take in cars from La Cruz and repair them. That's just a front, though. The real business is that we get requests for help, either from the sheriff or the Captain's government contacts, or local folks, and we try to help. That means dealing with things like haunted internment camps, infestations of fish monsters along the coast, demonic biker gangs, and more. For extra cash, we sometimes moonlight as stunt drivers for Hollywood b-movies – pretty exciting stuff, even if the movies are strictly garbage. Donovan Motors has a few apartments behind the garage where we stay and there's a kitchen and everything. I guess we're kind of like a family.

I understand that you are a burgeoning sorceress. How did you get started as a sorceress? Was it something you discovered on your own or are you continuing a family tradition of practicing?

Oh, I'm strictly an amateur – the magic is all from books. My father's an expert at magic, but from a very academic angle. I started that way as well, but once I started working at Donovan Motors, I realized that I could use magic to really help people. There's no witches in my family, as far as I know.

You also attend college. How do you balance your work obligations with things like finals?

Oh, my classes tie very nicely into my work. We'll be studying golems in class one day, for instance, and then get called up to deal with a golem in Glendale. Finding time to study is pretty tough, but I've got practical experience with the occult due to my job. That's not something that a lot of my classmates can say.

Where do you see yourself in five years?

Boy, that's a tough question. I can't tell where I won't be – slaving over a stove in one of La Cruz's many suburban homes, with a couple kids playing in the next room and a husband coming home from work in the big city. That's what most girls in La Cruz are expected to do. Being a housewife just doesn't appeal to me. Even when I was a little girl, I'd rather play with engines than dolls. That sort of made me an outcast in La Cruz. I guess it would be the same anywhere in America – and it's the same for everyone who works in Donovan Motors. Washed-up bank robber, Mexican Pachuco shamans, and gearhead zombies just don't fit into larger American society. Luckily, we have each other. I think I'll be working at Donovan Motors in five years, if I don't go into the occult business for myself.

Who is your favorite coworker and why?

Another tough question – but it's got to be Felix Tannenbaum. Felix isn't really a coworker, though. He's the Captain's adopted son, a little fellow who is only thirteen-years-old. Felix's parents were big name scientists in Germany, and the Nazis captured them during the War. They were Jewish, you see. I've bet you've read the new and don't need me to tell you the kinds of things they faced. Those Nazis made Felix and his folks work for them. The Captain found out about it and arranged a rescue – but it was too late for Felix's parents. Then the State Department snapped up Felix and put him to work in its own top secret occult warfare programs. Pretty terrible, huh? The Captain put a stop to that, pulling Felix out and adopting him. Since then, he's been Donovan Motors' own miniature mad scientist. He's smart as a whip and has a lot of practical experience with the occult. Also, he's got a wonderful mix of dignified, old world manners and adolescent nervousness. He likes me a lot and he looks up to Roscoe. I guess he's part of the family now.

What is one of the oddest jobs you’ve had before Donovan Motors?

Sorry, but I really haven't had any jobs before joining up with Donovan Motors. I signed up my senior year of High School and never looked back. I did a few summer jobs here and there, but nothing compares to my current job.

You and your coworkers are going up against a very wealthy and powerful man. What motivates you to fight Reed Strickland?

I guess I could get in trouble for saying this – my father's been accused of being a Fellow Traveler, you know – but Strickland is a businessman and I don't trust businessmen. You know the kinds of things that the owners of the orange groves around La Cruz do to their workers when the poor fellows try to unionize? It's not pretty. If that makes me Red, then so be it. Anyway, Strickland's been around for a long time. He built himself up during the Depression, using organized crime connections to shut down any attempts of his workers to unionize. He made weapons for the army, but he's no patriot. I've heard that Strickland was a big admirer of Adolf Hitler and sold them weapons as well. He's got this imaginary orderly version of La Cruz planned, where everyone's church-going and square as can be, and there's no room for Donovan Motors. He wants us gone and he'll do anything to achieve that – including make deals with the devil. Trust me on this – Strickland is bad news.

Thanks so much for stopping by and chatting with me, Betty!