Today's teaser is from High Stakes, book one in the Jacob Maresbeth Chronicles by Brandy Schillace. Before we get to the good stuff, let's get to know the book and the author a bit better! 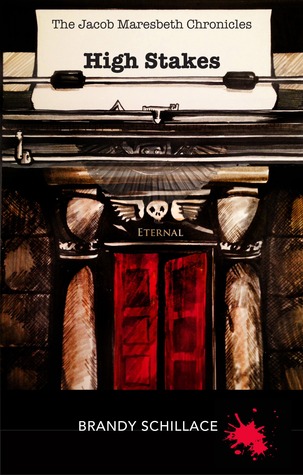 “I’m not a vampire,” insists Jacob Maresbeth, teenage journalist for the school paper. But what is a vampire, really? What happens if you have all the right symptoms, but are a living, breathing sixteen-year-old boy?

Diagnosed with a rare disease, Jake can’t help but wonder. After eight years in and out of the Newport News hospital, he’s had it up to here with doctors, diseases and dishonesty. After all, Jake’s father, respected neurologist Franklyn Maresbeth, has been hiding some of his more unusual symptoms for years… particularly that part about drinking blood.

In High Stakes, Jake records his summer vacation in the home of his maiden aunt, the bangled and be-spectacled Professor Sylvia. If that isn’t bad enough (and it is), Jake and his theatre-loving sister Lizzy must keep the “unofficial” details of Jake’s disorder a secret from Aunt Sylvia’s seductively beautiful graduate student, Zsofia. Will Jake survive a whole month pretending to be an invalid? Will Zsofia weaken his resolve with her flirtatiously dangerous Hungarian accent? Will Jake lose his heart–in more ways than one?

Author, historian, and adventurer at the intersections, Brandy Schillace spends her time in the mist-shrouded alleyways between literature and medicine.

Brandy grew up in an underground house in abandoned coal mining territory near a cemetery. It does things to you (like convince you to get a PhD). It also encourages a particular brand of fictive output. HIGH STAKES, Book 1 of The Jacob Maresbeth Chronicles, came out in 2014 with Cooperative Trade Press.

Brandy is managing editor of Culture, Medicine, and Psychiatry and Research Associate for the Dittrick Museum of Medical History. She is also editor of the Fiction Reboot | Daily Dose blogs. When she isn’t researching arsenic poisoning for the Museum, writing fiction, taking over the world, or herding cats, she teaches for Case Western Reserve University. Her non-fiction, DEATH’S SUMMER COAT, comes out with Elliott and Thompson in 2015.


EXCERPT:
Chapter 2 [after Jake and Lizzy have been sent to Aunt Syl's house for the summer]

... Dad had packed enough of the blood-bags for four weeks, but thankfully he sympathized with the psychological damage additional visit time would cause me. (Besides, its beach season in Newport News, and I was missing it).
Lizzy was all up for the challenge, of course, since Aunt Sylvia was her new favorite person, but Dad promised to come get me at the end of week two. Aunt Syl would drive Lizzy back up after classes were over. Problem solved. Sort of; I still had to put up with my aunt’s fussing and fluttering around me like a big well-meaning bird.