Today, B.R. Kingsolver is stopping by to talk about the settings of her book, and how her own personal travels have helped her make those descriptions come alive in her writing. For more from B.R. Kingsolver, follow B.R. on Twitter, Facebook, or Goodreads and be sure to check out B.R.'s website and blog. Here's a bit about B.R.'s book, Broken Dolls, and then I will be turning the blog over to B.R. 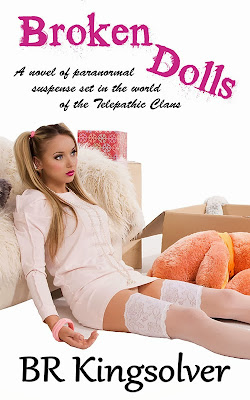 Private investigator RB Kendrick makes her living nailing cheating spouses, digging up other dirt to help in a divorce, finding long-lost relatives, and occasionally sniffing out criminal activity and fraud.

When she takes a job to find a missing girl, she has no idea she is headed for the most dangerous case of her career. Usually, her ability to read minds gives her an edge. But when the people she’s hunting are also telepaths, that advantage is limited.

The search takes her into the dark underbelly of telepathic society, where anything, and anyone, is for sale. She discovers that telepathic women and girls are being trafficked as the ultimate sex slaves.

With people trying to kill her, she’s on the run, not knowing who she can trust. Will she find the missing girl, or become a victim herself?


I’ve always had a wanderlust. I love to travel and see new and exotic places. This tends to come out in my writing, as my characters seem to do a lot of traveling.

Most of my books have been set in the Baltimore-Washington-West Virginia area, which I know fairly well. But the main character in Broken Dolls lives in London and the setting for a short story that was recently published in an anthology, Here, Kitty Kitty, is set in Santa Fe, New Mexico.
Broken Dolls starts in London, where RB Kendrick, the private investigator who is the main character, lives. It moves to Dublin, Ireland, then back to London, on to Paris, Munich, Zurich, London, Ireland ... the girl moves around.

One of the things that bothers me, and I assume most readers, is when an author makes a jarring error in place. Recently I read a novel set in Albuquerque, New Mexico, where I lived for a long time. The author made a reference to “mesquite”. There aren’t any mesquite trees within hundreds of miles of Albuquerque. So I try to be very careful to research and be accurate about the places I put my characters.

Of course, that’s much easier when I’ve been to that place, but some of my settings are places I’d like to go, not places I’ve been. It’s not that I try to write detailed, vivid descriptions of the settings in my books, but it’s so much easier to visualize the action if I have a firm idea of what the place looks like, and I think it makes it easier for the reader as well.

I  remember the contrast the gleaming, modern office buildings on the south bank of the Thames River make with the ancient Tower of London on the north bank. In Broken Dolls, I set the Gordon Building on the south bank. If the reader has been to London, or lives there, she shouldn’t have much difficulty visualizing the setting, and it should seem natural.

Likewise, I have a neighborhood in west London in mind when I write about where RB Kendrick lives. I don’t describe it in any detail, but it shouldn’t cause a London reader any problems with place.

This past summer, I had finished the first round of edits and revisions for Broken Dolls when I went on vacation to Paris. Since I was writing the book at the same time I was researching my trip, I had looked at lots of pictures and maps and felt fairly secure that my descriptions of the places in the book were accurate. But I eagerly looked forward to seeing those places in person.

As it turned out, I didn’t have to change any of what I’d written, but being there allowed me to add more detail to the descriptions in the book. It also gave me the opportunity to make the travel times between places more accurate.

There’s a scene in the book where RB is being chased by the bad guys. Before my trip, I was rather vague about the area where the chase occurs. Afterward, I was able to map her route from the Latin Quarter southeast of Notre Dame to the Military Academy just to the west of the Eiffel Tower and feel secure that the distance and surroundings fit in with the story.

Paris is an incredible city, with beautiful buildings and neighborhoods, palaces and architectural marvels such as the Arc de Triomphe and the Eiffel Tower. But there are also places that are very seedy and dangerous. Part of the book takes RB into the Pigalle red-light district, and I didn’t visit that area. The French police strongly discourage tourists from going there. Even in the pursuit of accuracy, some research topics are better imagined than experienced.
Posted by Unknown at Monday, October 28, 2013