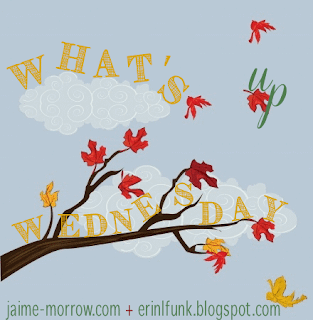 What’s Up Wednesday is a weekly meme geared toward readers and writers, allowing us to touch base with blog friends and let them know what’s up. Should you wish to join us, you will find the link widget at the bottom of Jaime’s post. We really hope you will take part!


I've seen this over on Stephanie Allen's blog several times, and keep telling myself I am going to take part. But then I never do. Well, today that changes! Today, I remember that my blog is not only for spreading awesome books around, but for keeping in touch with my readers and friends. So, here goes!


What I'm Reading:
I'm on chapter ten of Communion by B. Patterson for the blog tour by Bewitching Blog Tours. I'm completely hooked. His vampires, the dhampir, are so fascinating and such a fresh take for me. It has been a while since I've read a book narrated from a male MC, but Lester is just so likeable and different from other male MCs I've seen. After I finish up Communion, I'll be reading Actuator: Fractured Earth by James Wymore and Aiden James and The Curse of Malenfer Manor by Iain McChesney.

What I'm Writing:
I'm still chugging along with Altar of Reality. I'm on the final chapters, so I should wrap that up soon. Right now it is sitting at 56k, so it is definitely going to be shorter than I am used to. I think there is definitely a sequel or two ahead for it.

What Inspires Me Right Now
I've been watching Revolution to try to get into a survivalist mindset with Altar of Reality. I'm really inspired by my sister, who is finally sitting down and writing one of her awesome ideas. We were bouncing ideas off each other today, and it was just plain thrilling.
My family has been very inspiring lately. They threw me an amazing release party this past Saturday night, complete with a countdown until midnight and balloons dropping--the whole she-bang. It was awesome, and I am so incredibly lucky to have such an awesome support system behind me.

What Else I'm Up To
I gave up my part time job so I can devote more time and brain power to writing. I hope to have three books written and ready for the editor by January, when I go back to school.
I just released Heirs of War and have been obsessively checking Amazon sales. Luckily, Smashwords only gets reports every quarter or so from its distributors, so I can't do that with anyone else. I've sold 6 books through Amazon, though. Yay!
The hubby and I are trying to come up with cool and unique Halloween costumes since we decided to throw a party this year. I'll keep you guys updated on the progress. =)

And that's it for me today. What have you guys been up to?
Posted by Unknown at Wednesday, October 16, 2013

Email ThisBlogThis!Share to TwitterShare to FacebookShare to Pinterest
Labels: What's Up Wednesday