Blog Tour: Wail of the Banshees by Robert Poulin

Remember that awesome guy I interviewed last week? The one who struck an inspirational chord in your writerly lives? Well, today I am spotlighting Robert Poulin's book, Wail of the Banshees, available at Amazon, Barnes & Noble, Smashwords, and Kobo. You should definitely check it out. But until you do, you can check out the first three chapters below! 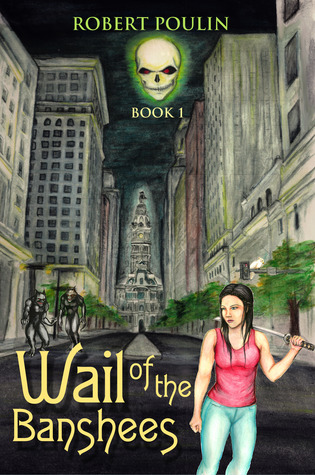 My name is Veronika Kane and dying, dying was just the beginning.

How was I supposed to know that getting smashed on my 21st birthday would lead me to becoming the 9th victim of a serial killer that’s been stalking Philadelphia’s streets for months? Now I’m a ghost and unlife is pretty scary. Reapers, wraiths, ghouls, gargoyles: all of the monsters that I thought were storybook characters are real! On top of it all, the powers that be in the ghost world want to enslave me and use me in their own diabolical plot to manipulate the people of the living world. Too bad I didn’t turn out to be the kind of ghost they wanted me to be, and I’m not about to let them turn me into one of their puppets. These ghosts are responsible for my murder and the murders of eight other women.

A rebellion is coming, and the ghosts that run this place are about to find out just how big a mistake they made when they had me killed.

My name is Veronika Kane and being murdered isn't the end of my story.

Wail of the Banshees is an Urban Fantasy Novel and the first book in the exciting Ghost Wars saga which features paranormal horror and action set in living Philadelphia and the ghostly world of Limbo.

I waited for hours, alone with my thoughts. I feared that I would be stuck to this place for eternity. As the hours passed and dawn approached, a mist began to fill the alley. Within minutes the street was obscured and the buildings around me were barely visible; their looming shadows seeming to brood over the landscape. I shivered as a sense of dread washed over me.
Another hour passed. Dawn bloomed over the city, but the mist did not die out. The city was strangely quiet; no traffic seemed to move on the street beyond the alley. Suddenly two large shapes appeared at the mouth of the alley. They looked vaguely human but something was weird about their forms. They were dark and massive, probably around seven feet tall, and their shape reminded me of the Thing from The Fantastic Four comic books. I wanted to run, to scream for help, but I was still stuck in place, unable to do either. I closed my eyes tightly, praying that I would wake up from this obvious nightmare.
“Here it is,” one of the monstrous creatures said in a deep guttural voice. “It be another shade.”
“This be the last one to harvest,” said the other creature, this one’s voice was grating, like fingernails on a chalkboard. “This one not banshee like supposed to be. Great Master will be angry.” “Yup,” echoed the first black monster. “We hurry now; tell
Great Master what we find.”
I opened my eyes futilely hoping that I would be back in my apartment. The things were standing just a few feet from me now; one of them reached an enormous clawed arm towards me. The creatures were black as night with glowing red eyes, no noses that I could see, and red gaping mouths with unnaturally white, jagged teeth that a great white shark would be jealous of.
I was still clearly in the nightmare.
I tried to shy away from the things touch but was still unable to move. I convulsed in agony as the creature’s claws tore into me; they sank deep into my ghostly body. I was finally able to scream; all of my fear, anger, frustration, and pain bubbled up in a long wail that seemed to shake the buildings around us.
The demonic apparition that held me paused to peer more closely at me.
“This one scream like banshee,” it said.
“It be a shade,” said its companion. “See it? It not a pretty banshee; it all foggy like a shade. Now we go.”
I looked down at myself, noticing for the first time that my body was different. In life I’d been beautiful: long straight black hair and piercing blue eyes had framed a delicate face. My lips had been full, my nose perfectly shaped. I had an athlete’s body with long, perfectly toned legs, small hips, a flat stomach, and boobs that guys couldn’t take their eyes off of. Now, my body was wreathed in a grey, misty fog. My features weren’t visible beneath the thick cloak of fog that wreathed my form. The brute that held me had buried its claws deep into me; there was no blood, but it still hurt like hell.
The ghostly thug pulled on me. There was resistance for an agonizing moment and then a tearing feeling. Once more I screamed, more in hopelessness than pain. As the creatures carried me to god knows where, I wept, the tears finally flowing. I also found that I was able to move, for all the good that did me now. I knew instinctively that the tearing that I’d felt a moment ago was my last connection to the living world. I was in hell or something near enough to it. My life was over; there was no going back now.
Posted by Unknown at Wednesday, August 21, 2013