A Teaser! An E-Book Extravaganza! Another Heirs of War (and more!) Giveaway!

I swear, I just can't help myself. I finish one giveaway, and I can't help but think of how I want to do the next one. This time, I've decided to make the giveaway as special as can be in two different ways:

1.) I'm not just giving away my e-book. One of the most amazing things about this whole writerly experience has been the vast amount of support I've received from all around the web. So I am also giving away three purchased e-book copies from three incredible people that have supported Heirs of War (and me) along the way. So you can not only win an e-copy of Heirs of War, but the following titles from authors that continue to inspire me:
2.) Heirs of War became a feature on Wattpad September 11th, and I have been overwhelmed by the amount of support and encouraging words people have given me. As I am writing this, I have 789 followers, 524 votes for Heirs of War, and over 46k reads. My jaw hits the floor every day when I look at it. So, as my way of showing how incredibly appreciative I am of all my new followers and readers, I decided to include a way to enter the giveaway with Wattpad. It isn't really intended to gain new followers so much as give the followers I already have a chance to enter their own way. In fact, if you've never used Wattpad before, I would encourage you to use the other ways to enter.

I'm also doing something else a little bit different. I'm not including an option to tweet about the giveaway. I know this is a great way to earn entries, but it is also kinda spammy, so I'm not a fan of it. If you want to continually comment on my blog to earn entries, that's cool. But I don't want to clog people's Twitter feeds. =)

And now, without further blabbering from me, here is the teaser for Heirs of War, and the Rafflecopter giveaway! If you want to enter the giveaway with a comment, here are the questions to answer:
What books are at the top of your TBR list? What is your preferred genre? Do you prefer e-books or physical copies? Why?
(Note, answer whichever ones you choose, let's just keep the conversation going!) 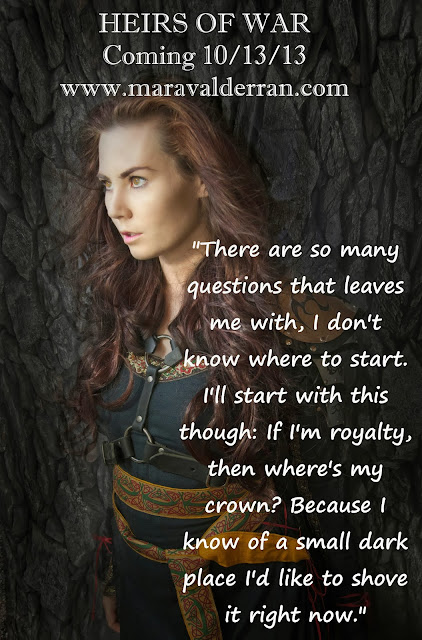 a Rafflecopter giveaway
Posted by Unknown at Friday, September 20, 2013

Email ThisBlogThis!Share to TwitterShare to FacebookShare to Pinterest
Labels: Coldness of Marek, e-books, First of Her Kind, giveaway, Heirs of War, Kiya: Hope of the Pharaoh, teaser image