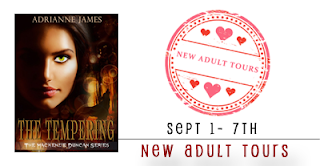 Writing paranormal characters can be a bit tricky. On the one hand, you want your characters to be human enough for the reader to connect with them. But on the other, you want them to be different enough to actually be paranormal. Werewolves are going to be a different from humans or vampires or fae. And of course, you want to make your vampires or werewolves to be different from the average run of the mill werewolves and vamps. Here to talk about striking a unique balance with writing paranormal characters is author Adrianne James. Her book, The Tempering, is set to be released September 13. Before I turn the blog over to her, let's get to know her book a bit better. 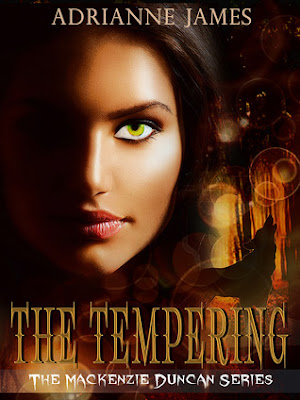 The Mythology department at prestigious Harvard University is tiny—and Mackenzie Duncan has just been selected as one of the lucky few. Her love for myths and legends is strong, but she never thought any of it could be real. After being attacked by a large wolf while walking home alone, Mackenzie realizes something is not right. She heals quickly, is suddenly super strong, and is experiencing mood swings that can't possibly be normal. The myths she's studying aren't myths at all. Werewolves are real and she's one of them. Fear of what she is, and who she might hurt sends Mackenzie running from the life she’s worked hard to build–and straight into the arms of a handsome Were named Geoff and into the home of his pack. Living with her new pack takes the edge off her confusion and self-loathing, but the arrival of new pack members changes the dynamic, and tests Geoff and Mackenzie’s growing relationship. The hardest part of being a werewolf is having no control and no memory of her time as a blood thirsty beast. When a moon cycle passes and she actually remembers bits and pieces of the night, she starts to ask questions, and the more questions she asks, the more she realizes she doesn't like the answers. Can she set aside her own sense of morals to belong to a pack that is like a family or will she leave everything behind yet again in search of a life she can be proud of?

Now, let's hear from Adrianne, and then be sure to check out her bio and how you can find out more about her after her post!


Adrianne James:
Have you ever become so immersed in a paranormal novel that you feel like the mythology could really be true? Have you ever wondered where the author gets the details? I did too. Then I wrote a paranormal novel and found out.
When I first realized that my newest plot bunny involved werewolves, I knew I was in for a heap of research. See, I typically didn’t read books about werewolves, at least not books where they were the good guys. I knew the basics that everyone does. A human turns into a wolf under the full moon. But I wanted to know more. I wanted to know everything I could about these creatures I planned to bring to life on the page.
When you look at paranormal stories you will find a common theme amongst each type. All vampires drink blood, all werewolves turn at the full moon, and all zombies are dead. So how do you make your characters stand out amongst all the other paranormal novels out there? Look at the details. Research into ancient folklore. Combine themes. Make it your own while still making it recognizable.
Take Twilight for example (and yes, I know, insert eye roll here). Stephanie Myers had vampires. They drank blood. But her twist came with the sunlight. Her vampires could be seen in the sun without bursting into flames, just brilliant disco balls. Now if you say a vampire sparkles, you automatically picture Edward Cullen.
So how do you do that? How do you brand your own characters? Think about your plot and how pronounced the paranormal aspect needs to be. With The Tempering, I combined three or four different mythologies and then added a dash of my own imagination. I created a DNA lineage based off an old werewolf myth and even gave my bitten werewolves a specific eye color that would identify them to anyone who knew what to look for. That is what worked for my story.
I think the best advice anyone could give an author looking to create a paranormal character is to know the story first. If you know what has to happen in the story, you can create a paranormal profile with all the detail needed to write a fully flushed out character. Oh…and keep ahold of that profile. If your novel turns into a series, not having to go searching for the information later is REALLY helpful. Not that I would know from experience or anything ;) 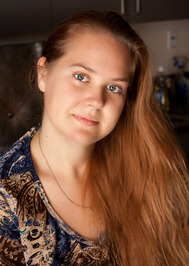 Growing up, Adrianne couldn't get her hands on enough books to satisfy her need for the make believe. If she finished a novel and didn't have a new one ready and waiting for her, she began to create her own tales of magic and wonder. Now, as an adult, books still make up majority of her free time, and now her tales get written down to be shared with the world.During the day, Adrianne uses her camera to capture life's stories for clients of all ages and at night, after her two children are tucked in bed; she devotes herself to her written work. Adrianne is living the life she always wanted, surrounded by art and beauty, the written word and a loving family.As a young adult and new adult author, Adrianne James has plans to bring stories of growing characters, a little romance, and perhaps a little magic and mythology down the line for her readers to enjoy.