I had the privilege of reading an ARC (advanced reading copy for newbies like me that didn't know the acronym) Exorcising Aaron Nguyen by Lauren Harris. This YA paranormal novella is the first in the Millroad Academy Exorcists series, and I am certainly looking forward to more. Warning: The review will have spoilers. Before I get into the review, let me tell you a little bit about Lauren Harris and her novella. 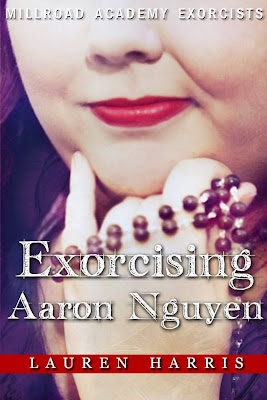 The murder of Millroad Catholic Academy's resident genius, Aaron Nguyen, shuts down student life at the boarding school in rural North Carolina...for about a week. With the resilience of youth, the student body bounces back, and the memory of murder is nothing but a streamer of caution tape fluttering in the breeze.

Unfortunately for them, Aaron's spirit has some resilience as well. Despite the priest's attempted exorcism, Aaron's ghost is soon breathing chills down the students' necks and hurling bunsen burners at nuns.

Georgia Collins doesn't give a shit about ghosts. All she wants is a story to prove her underground school news blog is more than a gossip column, closure on her one-sided relationship with her best friend Hiroki, and a vanilla latte. She wasn't expecting Aaron Nguyen's death to be anything more than a cold spot in the science hall, but since Hiroki has the curse of Spectral Sight, he is the only person who can see and speak to Aaron.

As the ghost’s demands for attention become increasingly violent, Hiroki enlists Georgia to help him investigate the crime, claiming that Aaron isn’t likely to move on until his killers are caught. Still hoping for spontaneous romantic combustion, she agrees to help bring Aaron's murderers to justice and set the vengeful spirit free...but it's not quite the close encounter she's hoping for. 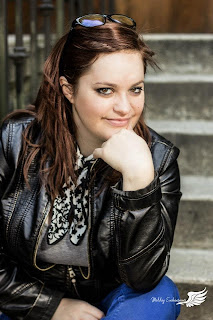 Lauren is a fantasy writer, voice actress, and the co-creator of 2012 Parsec Finalist, Pendragon Variety Podcast for aspiring writers of genre fiction, where she is known as "Scribe."
Her voice acting can be heard on Audible.com as well as fiction podcasts such as EscapePod, The Dunesteef Audio Fiction Magazine, and The Drabblecast B-Sides.
Though she spent three years living in Tokyo, she currently resides in a renovated tobacco shed in rural North Carolina, where she is pleased to have running water, wifi, and all her teeth.

At 107 pages, I have to say I didn't have high hopes for Lauren Harris to be able to draw me into the characters and their journeys. I expected a rushed or weak story. But then again, I'm not big on short stories. They frustrate me, constantly leaving me wanting more with no hopes of getting it.

Needless to say, I was pretty happy to discover this is a series. From the first chapter--nay, from the clever chapter titles (Ex: What's a Little Murder Between Friends?), Georgia's voice captures you. She's snarky without going overboard, edgy without being the typical rebellious teenager, and has baggage without being emo. And she's very much so reluctant to embark on this adventure of solving a murder with the best friend/boy she pines over, Hiroki.

Hiroki sees the world through a different light because of his "gift" to see the dead. He's so different, he can't stand touching people because he can tell just how readily they would accept death. Georgia tries to understand it, but until she gets a glimpse of it after getting a concussion, she never really sees it. And I don't think she ever really understands it until she is face to face with the ghost, Aaron Nguyen. Until that point, she is just a girl following her crush around as he struggles to exorcise a ghost and she struggles to understand him better. The real beauty of the situation at the end is that Georgia doesn't really see how her world has changed. Not yet. I'm looking forward to that realization in the sequel.

I love that Georgia feels so real. She's not beautiful or skinny from the way she is described, though she seems to be battling to accept who she is--appearance and all. To me, Lauren Harris captured the voice of true adolescent insecurity. It's not necessarily this constant voice in your head telling you that you are less-than. It's more the little, everyday reminders. The off-handed comments people make. The way a boy fails to look at you. The way your peers taunt you, even if it isn't relentlessly. One fat joke made in passing can haunt someone for a week. It's nice to see that real side of things, and to see Georgia fight against the feelings these minor incidents stir within her.

Georgia really is the reluctant hero in the end. She throws herself in the face of real danger--of the life or murdered-by-the-same-psycho-responsible-for-Aaron's-death variety--in order to save her best friend from the same fate. She's willing to sacrifice herself. I worried that the reason Hiroki didn't want to tough her was he would know she is going to die by suicide or something like that. But in the end, those same scars making Hiroki uncomfortable to touch her end up being her power. They give her the power to do good and to help others. I love that turn around.

To only be 107 pages, I feel like I went on this entire journey with them. I feel like I learned so much about the characters. How Lauren Harris managed to shove so much character development, plot, and tension into a mere 107 fluid pages of story telling is beyond me, but I'm looking forward to seeing her do it again.